About Polish ICT and gamedev in Dubai

Polish innovative thought in the global ICT and new technologies industry, AI and Internet of Things solutions in innovation processes, the importance of digitization for the development of the economy and public services, cloud computing and its role in establishing of a new generation financial center, domestic production and computer games distribution.

These are some of the selected topics discussed during three discussion panels with experts, organized by the Polish Investment and Trade Agency as part of the promotion of the Polish ICT and gamedev industry during Expo 2020 Dubai. A series of online debates were held on 25 February.

The role of smart and the Internet of Things

The topics of smart and Internet of Things (loT) solutions, artificial intelligence, as well as robotics and automation, were discussed in detail during the first discussion panel.

All panel members unanimously stressed that these are some of the most interesting areas of Polish innovation. This is supported by the fact that Poland is a leader in the Central and Eastern Europe (CEE) region in the scope of specialized AI courses in higher education, in particular at postgraduate studies. Moreover, Poland occupies the first place among CEE countries and seventh in the European Union in the scope of the number of experts working on AI development or its implementation.

- A next-generation digital platform will provide a new and better tomorrow for the citizens of Europe and the world. The new generation of the technology platform will also provide new values ​​for corporate collaboration – thinks Francesco Bonfiglio, CEO Gaia-X European Association for Data and Cloud.

Internet of things does a great job in sales or marketing sectors, and the cloud can also include solutions in the public sphere or the so-called smart cities. The above is also confirmed by the results of a PMR study. Almost half of large companies (49%) believe that within 3 years IoT solutions will have strategic significance for the development of industrial enterprises in Poland. Currently, smart solutions also play a very important role in the digital transformation of state services. They are in use in numerous strategic areas, including public transport, traffic management, power industry, healthcare or public offices and services. Experts agree that this trend will grow in the coming years.

- The coronavirus pandemic shows the importance of artificial intelligence and robotization in our daily lives. AI is the part of the ecosystem where we are now starting to develop or discover functions. Artificial intelligence is a very important part of the Polish economy in the new digital age. It is used, for example, in culture, logistics and transport. - thinks prof. Aleksandra Przegalińska - Koźmiński University.

The chief beneficiary of 5G will most likely be the Internet of Things (IoT), being the foundation of Przemysł 4.0 (Industry 4.0), but also the Smart City concept or Smart Home solutions. The enormous capacity of 5G networks allow for connecting up to 1 million devices per 1 km2. It is supposed to be a guarantee of IoT rapid development, as it will allow for greater flexibility, innovation and efficiency of existing processes.

A major challenge for the Polish economy is also the development in robotization. In 2019, the Polish industry advanced to the top 15 of countries with the highest number of new industrial robots for the first time in history. The trend of robotization most certainly cannot be stopped now, although naturally there may be various stages of its development.

- I think that now the most important thing is flexibility and speed of operation on the market and this is ensured by artificial intelligence. We see it in the largest businesses in the world, such as construction - thinks Sebastian Grabowski, Head of IoT/Smart City/Industry/Edge Enterprise Architecture Practices in Orange Business Services.

This concluded the first part of the expert debate on the promotion of the Polish ICT and gamedev industry at Expo 2020 Dubai. The panel was attended by:, prof. Aleksandra Przegalińska - Koźmiński University, Borys Stokalski RETHINK Partner, Sebastian Grabowski, Head of IoT/Smart City/Industry/Edge Enterprise Architecture Practices in Orange Business Services. 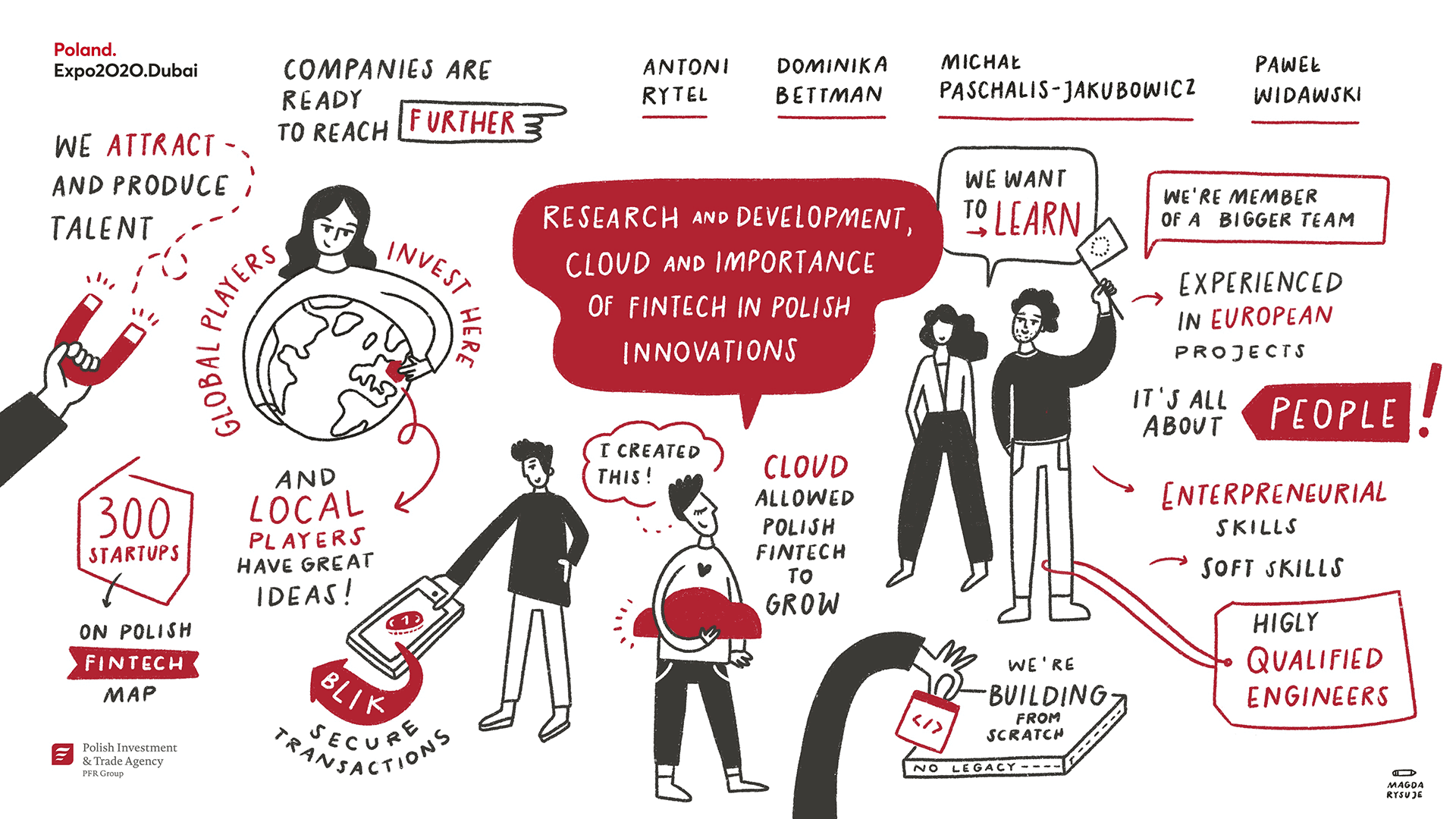 During the second debate, experts along with the government branch representatives addressed issues related to the development and expansion of new Polish technologies, digital cloud and data security. Another aspect discussed during the panel was the importance of fintech in the development of Polish innovation.

The significant role of Poland in the world of technologies and digital cloud is assured by  report „Invest in digital Poland” prepared by Digital Poland and the PAIH, according to which our country is one of the 10 best directions in the world to locate investments in the field of STEM. Poland is also leading in the branch of modern services in the region, both in terms of the number of research and development centers and employment in the industry. Furthermore, Poland is the fifth economy in Europe and one of the 10 in the world that attracted the most investments in the SMART area in 2020 in greenfield projects, i.e. projects built from scratch  - according to fDi Markets.

- The Polish economy has developed very dynamically in the last 30 years. He is a model for many countries in this regard. We have made a huge leap in development and we are still going strong. This development is also visible in the Polish digital economy - thinks Antoni Rytel, Wicedyrektor Programu GovTech Polska.

According to analyses of the National Bank of Poland (the latest one pertains to Q1 2021) and data of the cashless.pl portal, Polish consumers are more and more willing to make contactless payments via mobile devices. Increasing number of them start using such solutions as Apple Pay or Google Pay. Mobile payments are in rapid development all the time and are promoted by banks. According to cashless.pl data, customers of ten biggest banks in Poland carried out 297.5 million transfers of various types using mobile devices between July and September 2021. It is around 12 million more than in a previous quarter and 46 million more than in Q1 2021.

- I think there is no better example of perfect cooperation in the new technologies sector than Microsoft and Poland. Both sides reap real benefits in this new digital world. We are investing here because Poland has the right climate and the potential to develop new technologies – thinks Dominika Bettman - President of the Management Board of Microsoft Poland.

The banking industry is also leading the implementation and development of the so-called computing cloud. It also ensures proper security measures. As of now, 67% of banks in Poland is in possession of cloud security architecture based on proprietary solutions. On top of that, 25% of banks take advantage of native cloud security architecture, and 8% of them take advantage of external security service providers to secure the cloud.

- The knowledge, potential and ambitions of Polish IT specialists are of key importance in the development of new digital technologies also and I believe. They are able to quickly learn new, key competences necessary on this market – thinks Michał Paschalis-Jakubowicz - President of the Management Board of Oktawave.

This concluded the second part of the expert debate on the promotion of the Polish ICT and gamedev industry at Expo 2020 Dubai. The panel was attended by, Dominika Bettman - President of the Management Board of Microsoft Poland, Antoni Rytel – Wicedyrektor Programu GovTech Polska, Michał Paschalis-Jakubowicz - President of the Management Board of Oktawave and Paweł Widawski - Fintech Poland. 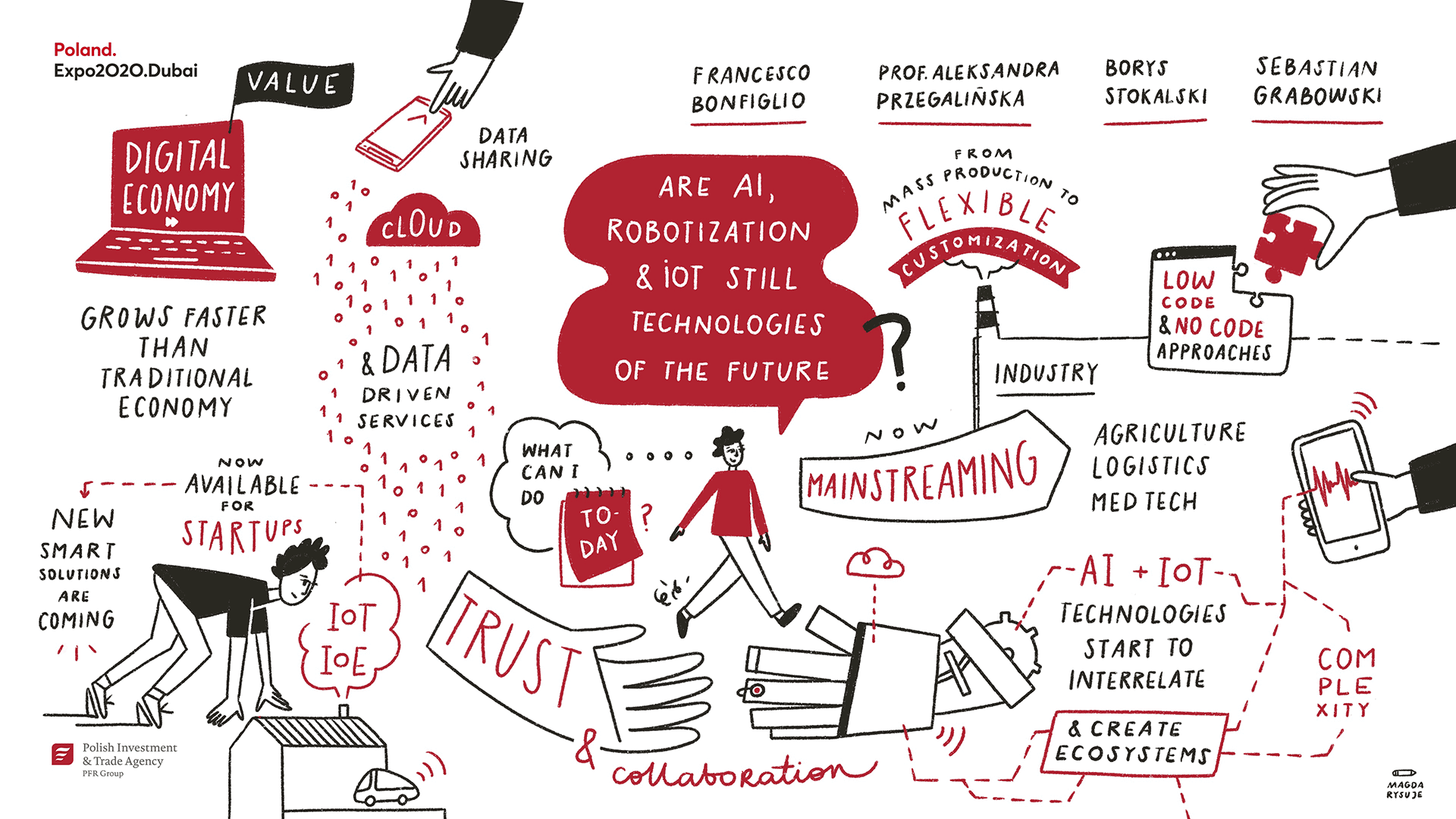 The last debate concerned the matters related to the production and distribution of computer games, esports and software. Poland can brag about when it comes to that branch. Sheer numbers and statistics show the might of the Polish gaming industry. The Game Industry of Poland 2021 report, prepared by the Polish Agency for Enterprise Development and Indie Games Poland (in cooperation with the Ministry of Development and Technology), shows that in 2020 the revenue of the domestic gaming industry amounted to as much as EUR 969 million. In year-on-year approach, this is an increase of nearly 30%. What is more important, such a significant growth has been maintained for three consecutive years.

- The Polish video and mobile game industry is one of the largest and most important Polish ambassadors in the world. We can be proud of the achievements of Polish programmers and the creator thanks to which Polish games are conquering world markets - thinks Jakub Marszałkowski - Indie Games Poland Foundations.

In 2020 export of Polish games prevailed over the import while over 600 productions are developed annually in Poland. Our country is already the third largest exporter of video games worldwide (annual export value of USD 1.5 billion), behind Japan (USD 2.7 billion) and China (USD 10 billion). Also, the number of gamers experienced a material increase. According to the report "The Game Industry of Poland 2021" there are more than 20 million gamers in our country, of which 49% are women and 80% are adults.

- As Poland, we have very good skills in the ICT industry. Polish universities and research centers are world leaders. Our advantage is the huge resources of talented graduates, candidates for programmers – thinks Grzegorz Słomkowski - member of the PAIH Management Board.

The eSports market in Poland is developing equally dynamically, while being increasingly perceived as not only an important part of the entertainment industry. It appears from „Let’s Play! E-sports market in Poland" report by Deloitte that more than half (52%) of Polish people aged 16-65 have at least once come into contact with e-sports and 26% have at least once paid for e-sports related products, content or services. Polish Esports League (PLE), established in 2017, which organizes professional games and tournaments for professional gamers also provides a lot of power for the sector.

- Esport is very similar to traditional sport, it evokes similar emotions. Worldwide, millions of people are interested in this fairly new discipline. In Poland, the popularity of esport is also high. To get into full halls in our tunnels - Paweł Kowalczyk - President of Polish Esports League Management Board.

One of discussion topics during the debate were changes in the software house industry in Poland. On the one hand, it is undergoing major consolidation, headed by Asseco Poland, TenderHut, Netguru, Avenga, and Euvic, to mention just a few, and on the other hand, it is focusing more and more on creating and selling its solutions on international markets and investing into their own IP. It is worth noting that the Polish IT industry generates revenues around PLN 85 billion (excluding turnover of micro enterprises). The software and IT services sector accounts for around PLN 55 billion, i.e. 2/3 of the total IT industry in Poland.

- We focused very much on software, because we believe that we need innovative solutions allowing for faster development of companies and state institutions such as hospitals, offices, public transport, schools - Artur Wiza - Executive Vice President Asseco Poland.

At the end of the event, Ewa Lis-Jeżak, IDC Managing Director in Poland and the Baltic states, expressed her acknowledgment to all participants. 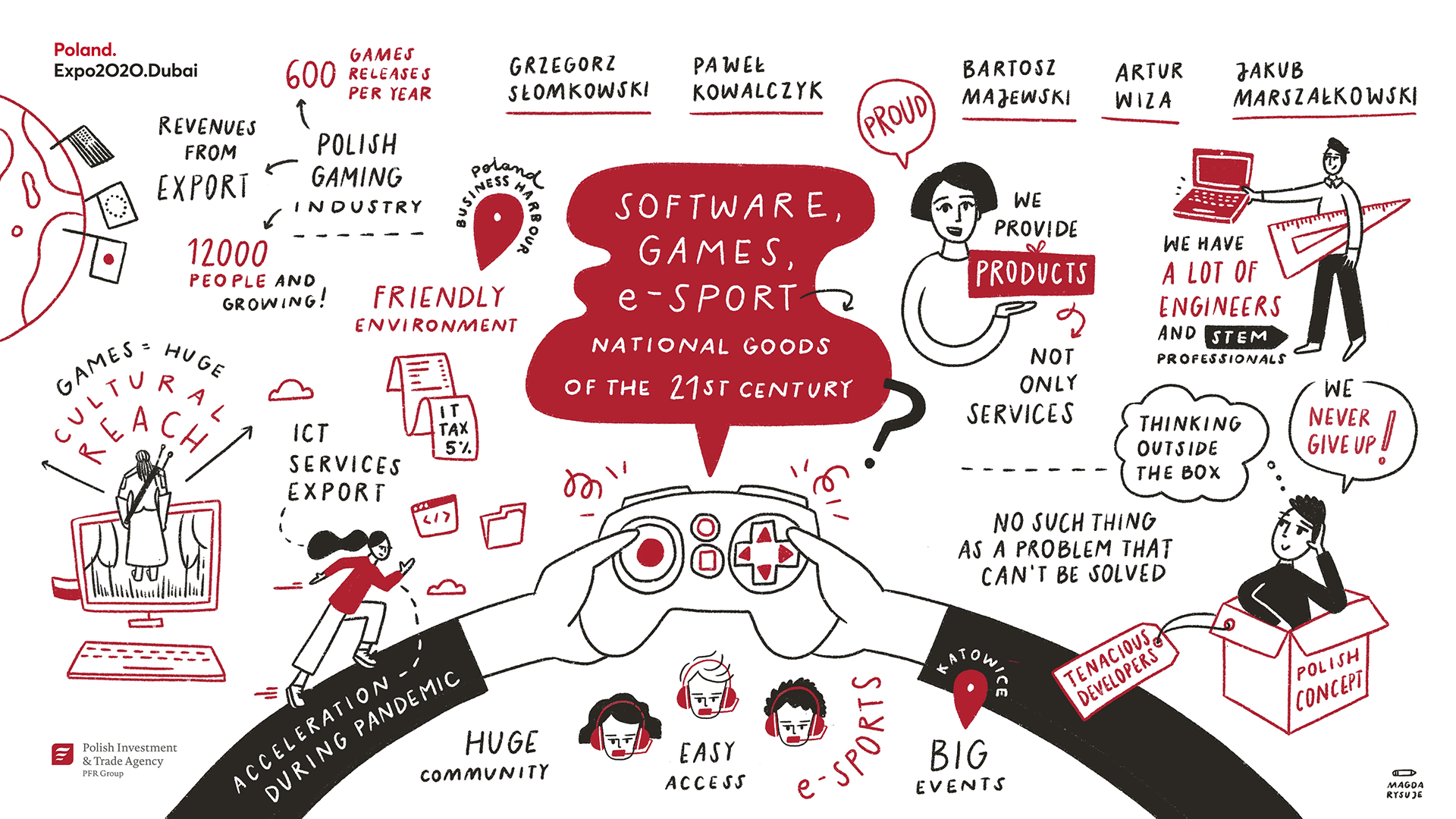 Get in touch about Expo

News
For the press